Archive for the tag “eucalyptus”

The Fast and the Fugitive 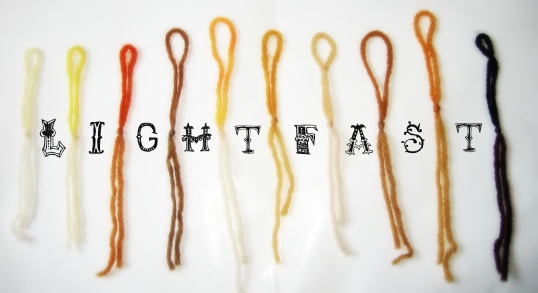 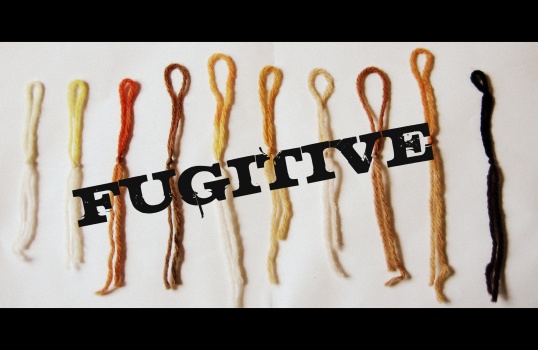 It’s all fun and games until your colours fade away.   When we talk about dyes, we often refer to them in one of two ways:  substantive or adjective.  A substantive dye is one that does not need a mordant to adhere to the fiber.  It is capable of bonding directly to the fiber on its own.  An adjective dye does not bond to the fiber on its own and requires a mordant to help the dye adhere in a lasting manner.  We also use a few other terms when talking about dyes—like fast and fugitive.  A dye that is fast means that it has staying power.  A dye that is fugitive means that it’s going to run for the hills–ie, is going to fade in some manner and make you weep tears of woe for all your hard work wasted.  This fading can happen by washing, wearing, or being exposed to light—the latter being one of the more common ways for a dye to fade.   From what I’ve read, there are very few substantive natural dyes.   The majority require you to add a mordant to your dyeing process to help not only bond the dye to the wool, but also to help a fugitive dye become more wash- or lightfast.  It is recommended that one perform a lightfastness test on naturally dyed yarn to determine whether or not you’ve achieved a relatively stable dye.  This is also recommended to test for fastness anytime you experiment with a new process or dyestuff.  It lets you see firsthand if it worked.

Following are the results from the lightfastness test I conducted on the dyes used for Dye Day #1.  It is very important to note:  This is the unmordanted yarn that I used as a control.  I repeat, this yarn is unmordanted!   I wanted to see how fast these dyes were on their own.  To my knowledge, with a mordant such as alum, these dyes are all quite lightfast.  The lightfastness test was conducted for exactly 1 month, from June 23 to July 23.  Swatches of each yarn were collected, and half was tucked between several sheets of dark construction paper, while the other half was left exposed to full sunlight outside.  Here goes: 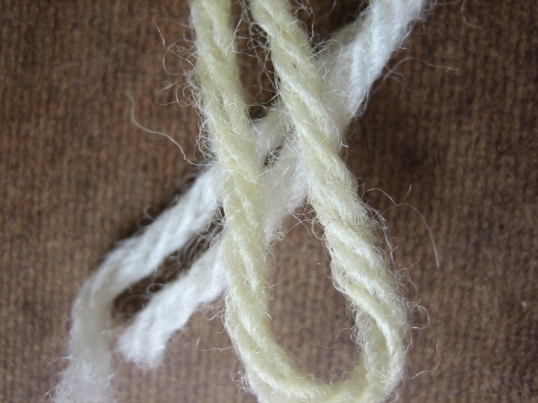 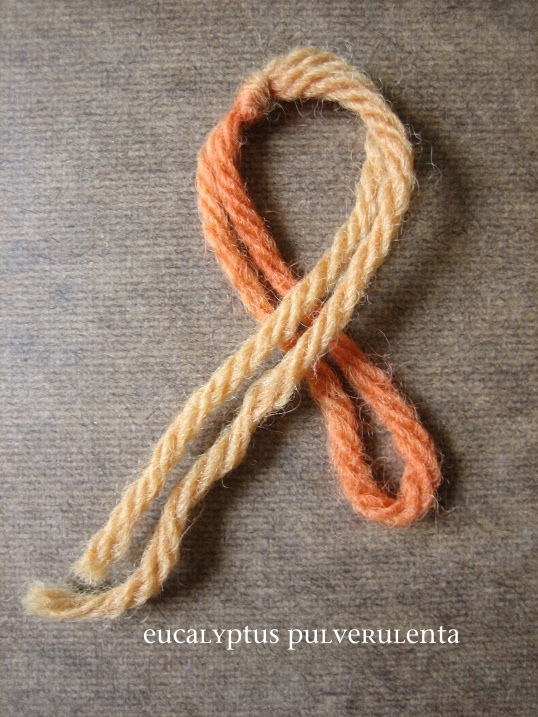 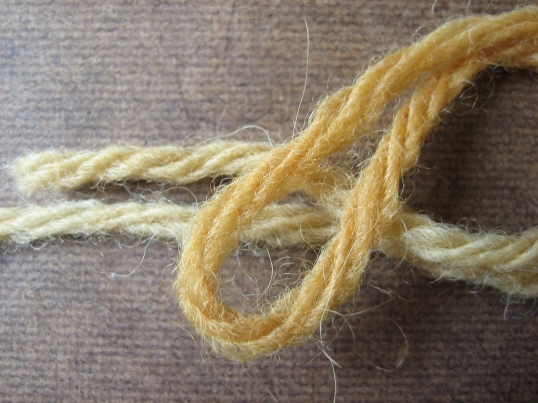 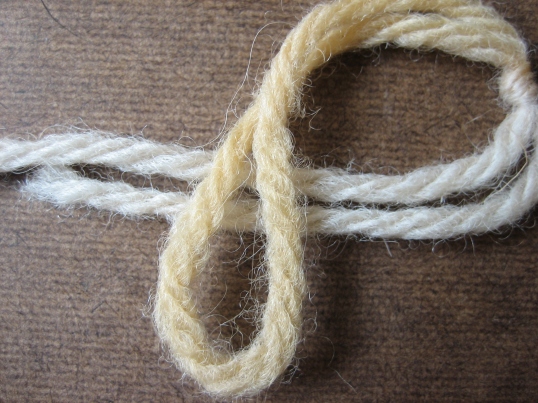 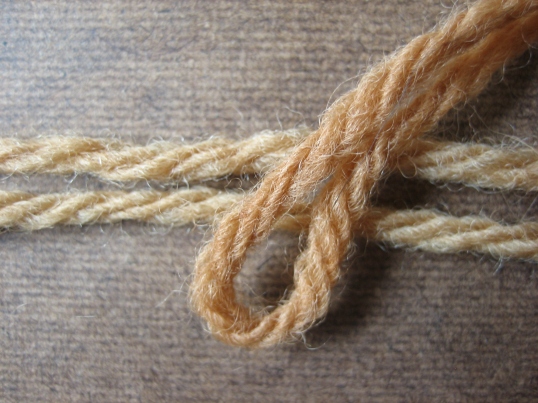 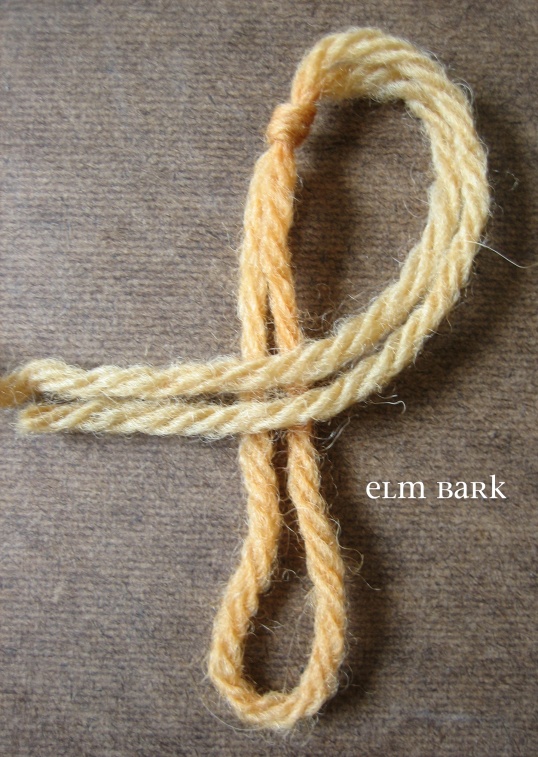 As you can see, the majority of the swatches demonstrate a study in lightfastness FAIL.  A few, like the elm and onion, only faded a little bit.  The alkanet faded more than I expected, but given how super unexpectedly dark it dyed to begin with, it’s really faded to closer to the colour I thought it was going to dye anyway.  Particularly low scores go to safflower and eucalyptus.  They surprised me.  And the TOTAL FAIL! of the lightfastness test goes to… annatto seed.  Whoa, nelly!  For something that was so willing to dye everything in sight, it sure did fade fast.  The annatto was gone by week 2.  Some of these dyes, like the eucalyptus, are said to be substantive, and I think that perhaps under normal circumstances it would not have faded so much.  We’ve had crazy high UV days here this summer, such that it would test the lightfastness of dirt, I think.   I suspect that if this test were conducted at a different time of year, the onion, alkanet, elm, and eucalyptus would have faired much better.  Just conjecture, but I think a safe assessment.   As always, I’d love to hear about your results with natural dyeing.

Orange.  Beautiful, deep, rusty orange.  That was what made me want to dye with eucalyptus.  I love orange.

Did you know that there are over 700 species of eucalyptus?  And none of them are native to Missouri.  Which meant that I was going to have to hunt for a source.  Somewhere.  Because no dyer’s supplies carry eucalyptus either.  But that wasn’t the difficult part.  The difficult part was figuring out which species of eucalyptus would give me the colour I desired.  In Wild Colour, Jenny Dean talks about dyeing with eucalyptus, and gives good instructions for how to do so, but very little information on what kind to use.   I was able to find a little bit more information online—mostly from blog posts by intrepid experimenters and comments from other dyers.   I think it’s important to say that if you Google “dyeing with eucalyptus” or some similar search term, you’ll get a surprising number of results.  But a lot of information on dyeing with eucalyptus, while fascinating, was not useful for this project because  A) it was for eco-printing rather than dyebath dyeing  B) used species of eucalyptus that I don’t have access to  C) didn’t get orange  D)  used bark rather than leaves or  E) did not include pictures of results.   By the way, that eco-printing thing?  Very cool.  So totally want to try that.

But by digging around on some of the great links above, I was able to narrow down the field substantially.   I found a number of references to dyeing with “silver dollar eucalyptus”.  Well, guess what.  Lots of species of eucalyptus are commonly called “silver dollar”— cinerea, polyanthemos, cordata, gunnii… See the problem?  I realized that I was just going to have to close my eyes and pick one.   I finally settled on a variety that I could easily find locally:  eucalyptus pulverulenta, aka “baby blue”.  This variety is frequently used by florists in arrangements, which meant that I could buy it fresh by the bunch.  If fact, I actually ended up buying it at Trader Joe’s of all places, for $5 a bunch (which was $10 cheaper per bunch than my local florist was going to sell it to me). Be careful, though— lots of places sell dried eucalyptus for floral arrangements, but it’s been dyed.  Don’t use that kind!

So, I had the eucalyptus.  Now it was a matter of seeing if my research and varietal gamble would pay off…

Ratio of dyestuff to fiber:  The standard recommendation here is a 1:1 ratio.  I used closer to a 2:1 ratio.  We had 160g of fiber in the dyepot, and I estimate that we had about 300g of eucalyptus.  This was the one dyestuff that I didn’t get to weigh, so I’m guestimating that this was roughly the amount used.

Preparing the dyestuff:   Most of the information I found said that eucalyptus dye results are incredibly variable.  Even results with leaves from the same tree can differ based on if you harvested leaves during a dry spell, after a rain, or from the sunny or shady side of the tree.  Amazing!  But most everybody agrees that the leaves that give the most colour are those that have been dried.  So after I bought my fresh leaves, I hung them upside-down in small bunches in the Snug to dry for 3 weeks.  It smelled heavenly.

Eucalypt drying in the Snug

Extraction method:  The leaves and small stems were crumbled up into a stainless steel pot, covered with water (tap, pH 8.8), and then simmered very, very, very gently for 1 hour.

Dyebath:  Yarn was added to the dyepot with the leaves still in, as this is what is recommended for the best colour.  The dyepot was hot at this point, and I was worried about adding yarn to it that way, but it turned out ok.  In the future, though, I’ll do what Rebecca Burgess recommends, and soak the yarn in warm water first.   The dyepot was then brought up to a super gentle simmer again and maintained for 2 hours.  Jenny Dean says that it takes 3-4 hours to get the colour out of eucalyptus, but we found that it happened closer to 1.5-2 hours.  The pH of the dyebath was 4.9.   Again, we were very careful not to boil it.  Boiling will apparently kill the colour and make you VERY SAD. 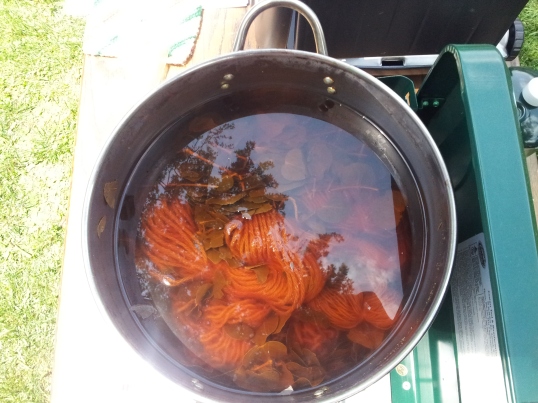 Delish-alyptus dyebath. Look at all that colour!

And now we pause to discuss the DELICIOUS SMELL that is the eucalyptus dyebath.   Delicious.  Wonderous.  Fantabulous.  I would compose odes to it.  I would sing songs about it.  It is worth it to dye with eucalyptus just to be able to stick your face over the dyepot and breathe in all that goodness.

The results?  TOTAL SCORE!  Which means, we got orange, baby!

Note, that the superwash wool took in a much darker colour again.  Of course it did.  This picture isn’t quite true to colour, because the superwash actually is a more rusty-brown.  That Fisherman’s wool is pretty accurate, though.  That stuff came out mad orange.  I love it.  And bonus score?  The wool comes out smelling like eucalyptus, too!  I think I mentioned how good that smells…

Here is the eucalyptus drying later that day.  It’s been rinsed, but not washed.  Superwash is on the right this time.

Eucalyptus skeins drying right after dyebath.  You can see bits of leaves in it still.

For a comparison, here are my friend Kittyraja’s skeins.  I’m showing these, because she used superwash and non-superwash, but both of hers were mordanted with the 8% alum 7% CoT.

Now, I haven’t written about the sad, sad part of Dye Day yet.  That would be the stinkyass osage orange FAIL.  The trauma is still too fresh.  But I will talk about how well the eucalyptus works to cover up the bad, bad smells and complete lack of colour of other failed dyebaths.   I overdyed this skein in the eucalyptus exhaust.   The interesting thing is that I first just plunked the skein in the cold dyebath dregs just to get the smell out.  And look at what it did— 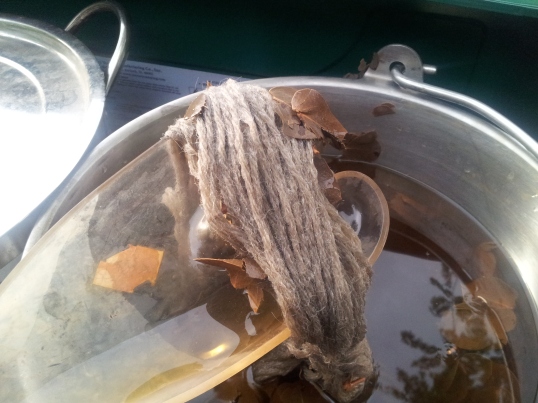 It actually had a bit of a blueish cast to it. Mind you, this skein started out cream coloured.   I wish now that I’d kept at least a sample to see how it would have dried.  But I decided to reheat the dyebath to overdye the yarn.  This is what I got–a very pretty and not at all stinky golden yellow.

I will absolutely be dyeing with eucalyptus again.  It was my favorite out of the whole day—a total sensory experience.  Absolutely love it!