Archive for the tag “socks”

These were a long time coming. Slow knitter, frequent tinker = Me. Remember when I dyed some sock yarn with black beans? I finally got that yarn knitted up into some socks. Took a while, because I played around with different construction, and ultimately changed needle size entirely. And, you know, I moved and they sat in a box for a while until I dug them out a couple weeks ago and started over again. Moving is bad for craftal expediency.

These socks were knit toe up on 2 circulars, two-at-a-time. I always begin toe-up socks with a Turkish cast-on. It is my favoritest ever—so easy to do and, most importantly, very easy to remember how to do. Mind like a sieve. Then I knit my standard Super Rounded Toe which goes something like this:

Part Two:
Increase in the same manner every other row until only 3 increase rows are needed.

This method works really well for making a nice rounded toe as opposed to the typical pointy toe that many sock recipes call for. Below you can see the difference between a standard toe and my Super Rounded Toe that I did for Dave’s Business Socks:

And then for some extra fun, I did something different for these socks that I’ve never tried before—I knit afterthought heels. It was convenient because I got to the heels while we were at a Comic Con with the kids, and I really didn’t want to stop knitting, which I would have had to do for any other heel type. Mind like a sieve, remember? However, I grossly underestimated the amount of waste yarn I’d need to mark my placement for the heels and had to improvise in order to survive. Not much yarn to be had at a Comic Con.  I did, however, find a plastic bag that someone left on a bench. So I ripped a long strip off of it, gave it some twist, and continued knitting merrily on my way. You do what you gotta do out in the wild. 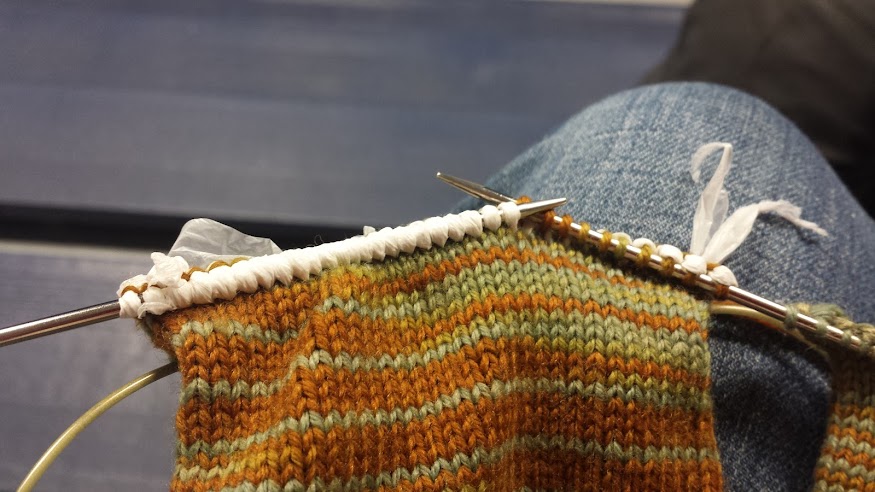 A word about afterthought heels. EZ (Elizabeth Zimmermann, the Great and Powerful Oz) only gives an outline for how to do this method, requiring, as she does, for us to use our own brains. So I did some interweb research to try to find out more information as to avoid unnecessary and repeated tinkage. One can but try. In particular, I wanted to know exactly where the waste yarn (or for the very brave, the cutting!) should be placed. The interwebz proved very vague on this point. My inclination was to place the waste yarn in the same location where one would start a Sweet Tomato Heel–just before the ball of the heel directly below the crease where the ankle turns into the instep. I found one reference that agreed with this placement, and so I ran with it. Which was a good call, because it fit perfectly.

Then I knit up to the top, added some ribbing and finished with EZ’s sewn bind-off, which again, is my favoritest.

A note on the yarn at this point: Argh. It turns out that ammonia is a pretty harsh modifier. There was breakage within the skein, but only where I modified it with ammonia. Those are the greenish coloured sections. Clearly I applied it too strong for too long. Lesson learned. Because of the number of places where I had to piece the yarn back together (nothing crazy, but enough to be annoying), I don’t expect these to hold up too long.

After the bind off, went back and picked up the stitches on either side of the waste yarn. Then I snipped and removed the waste yarn (easier said than done) and was left with the sole stitches (half of the total stitches) on two needles. 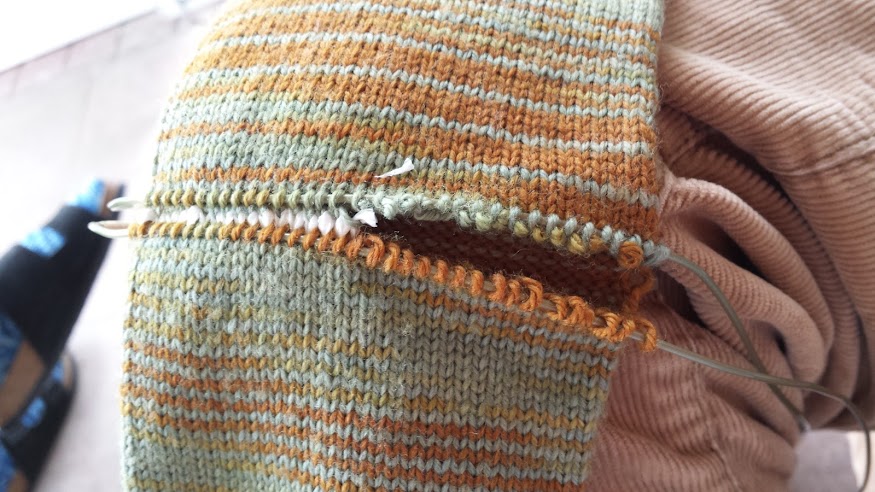 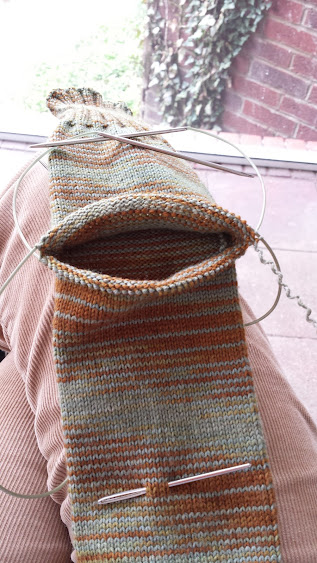 At this point, I had to experiment a little bit. In my reading about afterthought heels, one complaint I encountered was that the heel didn’t fit well—specifically, that it pulled too tight across the instep. My first thought for correcting this was to add some short rows in the corners on each side in order to add a bit more depth. I tried this, and while it added the needed depth, it also created a little puckery pocket on each side of the heel. Boooo! That was not attractive. Tink!

I fixed the problem by picking up additional stitches in each corner (4 on each side) and then knitting 5 rows plain before beginning the decreases for the heel. This worked beautifully. The afterthought heel is essentially a toe. Yup. You knit a toe where the heel is and, miracle of miracles, it fits.  After knitting 5 rows plain, I began decreasing 4 stitches every other row. Just like on the toe, these were done at each corner of each half of the sock, leaving a knit stitch worked at the end: K1, K2tog, knit however many, K2tog, K1. I did not do matched decreases, I just did K2tog. It works fine. When I got to the last few rows, I decreased every row until I had 9 stitches on each needle (18 total).

Then I committed the Kitchener Stitch.

Here are the finished socks: 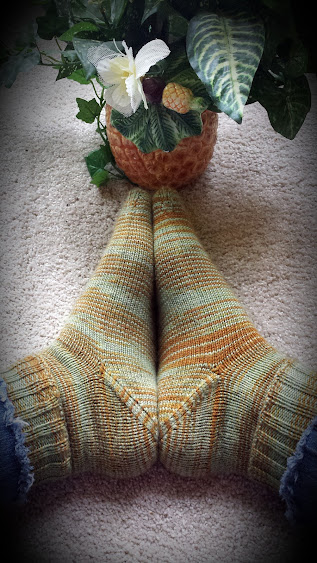 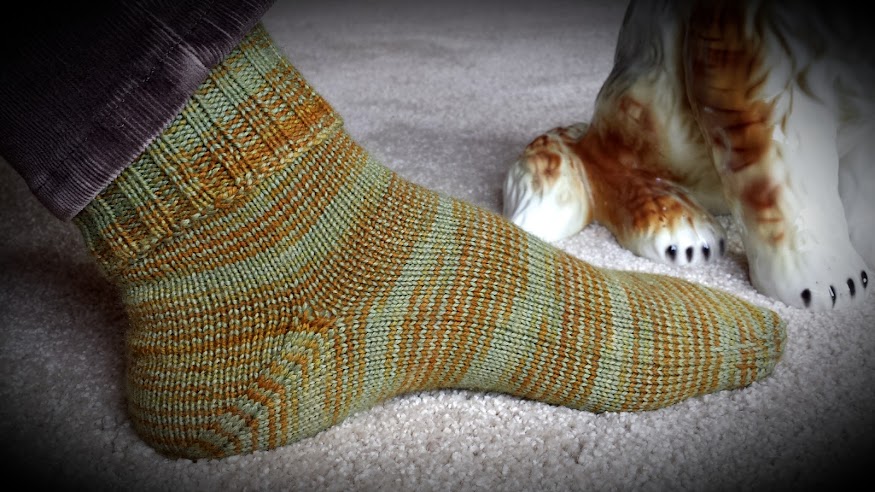 I was skeptical about how the afterthought heels would fit, but they’re actually really comfortable. The only thing I don’t like about them is the impossible donkey ears of the Kitchener grafting. I worked the first two and last two stitches together to improve the issue, but it doesn’t entirely correct it.  See what I mean? 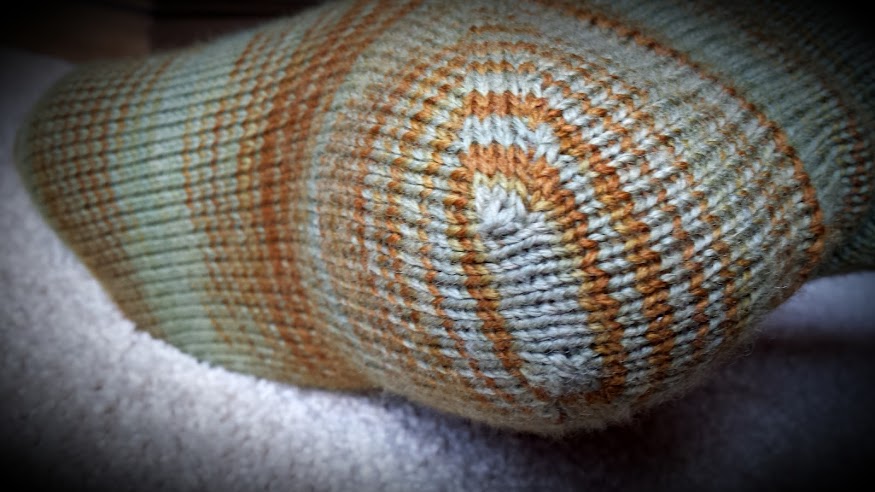 In the future, I think I’d try a star decrease pattern on the heel instead.

It was interesting to see how my haphazard over-dye job knit up on these socks. What is most curious is that one sock is quite a bit darker than the other. I want to learn more about dyeing for different striping patterns. More to play with. :D 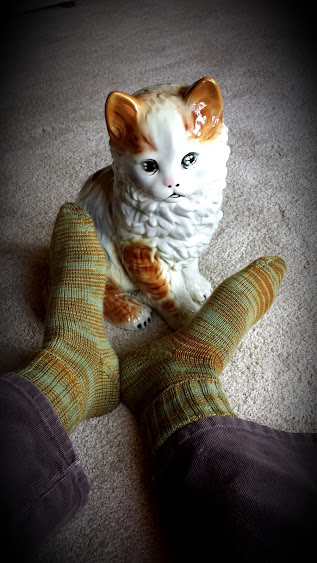 As always, tinks on me. ;)  Tune in next time for some cute baby knits.

It took me quite a while to figure out what I wanted to knit with all the yarn samples I dyed on Dye Day #1, but it finally came to me in a semi-blinding flash:  house socks. But not just any house socks.  I wanted to knit a pair of house socks like I imagine Tiffany Aching or Nanny Ogg wearing—thick and warm, functional yet quirky.  If you aren’t familiar with Tiffany Aching or Nanny Ogg, they are two characters from one of my favourite series of books ever in the history of the history:  The Wee Free Men, A Hat Full of Sky, Wintersmith, and I Shall Wear Midnight—all by the amazing author Terry Pratchett.  I will not wax on about the books here, but suffice it to say that they have depths, and although I do not call myself “witch”, if I were to be a witch, I’d want to be Tiffany Aching.

I went for a thicker stripe on these—8 rows.  It not only had the look I wanted, but it meant weaving in fewer ends.  I love stripes, but, man, I always forget how much I hate weaving in all those ends.  I call this “stripe amnesia”.  It gets me every time.  48 ends per pair, not including the toe and cuff.  Oy!

But I really like how all of the hand dyed colours went together.  I especially like how much greener the red onion yarn looks next to some of the other colours.  Here’s the line-up:

Starting at the toe—

When I was knitting these, I thought that I would stitch felted soles on so that I could pad around the house without worrying about wearing holes in them.  But when all was said and done, I decided that I’d like to be able to wear them in shoes, too.  So I left the felted soles off for now.  We’ll see if I change my mind.  I loved knitting worsted weight socks.  I love wearing them, too.  Super ridiculously cozy and warm.  Perfect for this cold weather.  Glad I got them done before spring!

Just finished a loooooooong project.  Srsly.  I knit and tinked these socks so many times I lost count.  I know I knit 3 separate full pairs of socks before I got the ones I’m happy with.  The first two times were to change out yarns and stitch patterns.  But all the others were for just one reason:  heels.

For a couple years now, I’ve been searching for the perfect go-to sock knitting formula—something that I can toss on the needles and play with, but where all the key parts are already set—namely, the toe and the heel.   Well, I came up with my own way of making a super-rounded toe that quickly became my favorite, but the heel department was seriously lacking.  There are a millionty ways to knit a heel, and I didn’t like any of them.   I like how a traditional heel flap & gusset fits.  The problem is that I prefer to knit socks two at a time on circulars, and it’s a total pain to knit heel flap & gusset socks this way.  Plus, if you want to go toe-up, which I do, the reverse heel flap & gusset leaves much to be desired.   Otherwise, most toe-up socks require some version of short rows.   I hate wrap & turn short rows with the fire of ten thousand suns.    All the other “easier” variations of  short row heels left me laughing maniacally at the walls.  Easier.  HA!  And then Cat Bordhi came to the rescue with a ridiculously clever invention:  Sweet Tomato Heels.

This heel is perfection.  It can be knit toe-up or cuff-down.   It is super easy to learn how to do and super easy to remember once you’ve done it.  Best of all, it fits like a dream.  Cat made an awesome video tutorial for the technique, and she also very kindly offers help and advice on the Ravelry Sweet Tomato Heel group.  Sweet tomato heels have rocked my world, and I don’t anticipate trying any other kind of heel any time soon.  It’s that good.

I spent the better part of 3 years knitting these socks for Husband.  That’s a long ass time.  In the end though, many lessons were learned, and I’m a better knitter for all the tinking.   I call them “Business Socks”, and if you’re a fan of Flight of the Conchords, you’ll understand why. ;)  You can get all the details from my notes, which are many, on my Ravelry project page.